skip to main | skip to sidebar

Photos from Nothing Changes 4.10.13 with MOTIV-A 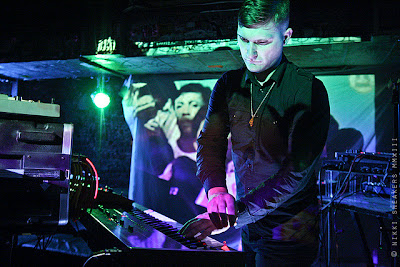 all photos by Nikki Sneakers 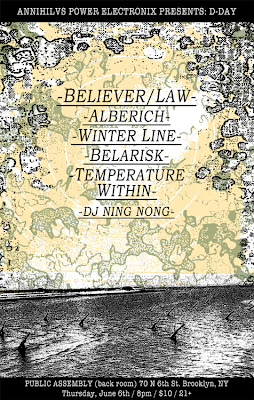 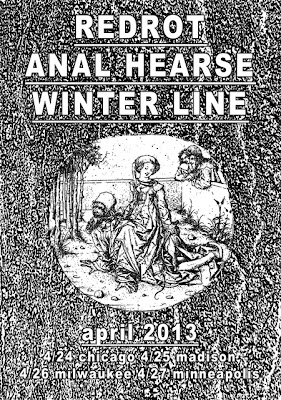 Side A
Recorded winter 2012 by S.V.
Mixed by Kris Lapke and S.V.
Mastered by Kris Lapke
Side B - Live Excerpts
Recorded by Janusz Welin
Mixed by S.V.
Posted by AUM WAR at 10:07 AM No comments: 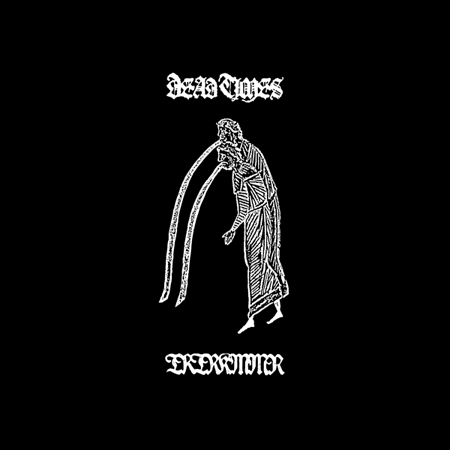 
TRTRKMMR evades definition.  Not confined merely to the dismissal of genre and classification, this material turns wholly at the discriminate whim of its singular craftsman, and no other.  Eschewing paltry public fixations of extreme music, TRTRKMMR personifies its antithesis - the discipline of meticulous, private labor.  Splicing, adjusting, trimming, scrapping, reworking.  The entirely analog recording, cut-up loops, samples and feedback all place TRTRKMMR within the continuum of abstract electronic noise, but here it is refigured within convulsive rhythms structured by the playback of disfigured LPs and further punctured by guitar and utterly caustic humanoid vocals.  The document shudders with violence and terror, interwoven with passages of organo-mechanical pulsations, flutters and colored static, torn throughout by eviscerating feedback.
The results of this process don't merely illustrate the forms of concrete, industrial sound, but in the best tradition of the pioneers (SPK, Throbbing Gristle, Masami Akita) they embody it and expand its parameters.  It hisses and sputters oil, crumbles, then turbines are pushed to maximum; at times it resembles a pouring of molten lead, in others like razors through fog.  Corrupted bass percussions stumble over each other unevenly, abruptly disintegrate and reconstitute within throbbing progressions, building and collapsing simultaneously.  Pounding and chainsawing guitars channel damaged Metal, but again - there is no safe home for this material.  TRTRKMMR exists within idiosyncratic process and uncompromised pursuit of vocation.
-Dead Times

Dead times.  The dead past.  But what is the past?  One hundred years ago?  One second ago?  It is all the same.  Dead.  Other than the elusive moment of now, that which is commonly regarded as “present” is little more than an accumulation of expiration…a kingdom of corpses. We exist primarily as spectres, arrogantly haunting the dead present with pitiable naivety and punishable indignance. Basking in residual essence.  It seeps through our memory world.  Staining and discoloring all within.  Anything not directly experienced is further illusory. Our memories of others’ memories.  The objective is a lie.  So what is there to do when all is dead?  Perhaps Cioran stated it best: "True, without it we are committed to an infinity of dead ends.  But even when we know that nothing leads anywhere, that the universe is only a by-product of our gloom, why should we sacrifice this pleasure of tottering and of splitting our skulls against heaven and earth?"  And that is what we shall do.
Bombastic rhythms pummel and shudder.  Solid, merciless.  They point to the hardest of the Wax Trax, but without the sterility, minimalism, and marked adherence to 1980s synth convention.  This foundation is draped in blankets of sonic decay and detritus.  Not continuous deterioration, but rather a dispersion of discreet variables. Thousands upon thousands of quarter-inch steel cubes, poured into flows…stacked into monoliths…strung onto threads…scattered into nonsensical disarray.  Feedback and transmogrifying synths add shape and texture to the digital coalescences and fragmentations, while retched vocals provide the motives (both ulterior and express).  Curious melodies surface and recede.  Playful and sinister.  Asahara smiles, for he knows the deceptive power that lies within such efforts.
In the dead times nothing is permanent, nor unalterable.  Any story can be retold differently or repeated incorrectly and a new past formed.  Any element can be seized at any moment and manipulated…irrecoverably changed.  Until it is changed again, that is.  That is not a bell.  That is a representation of a bell, which has now been ruptured and twisted into non-bell.  Now it is a wailing soul. Now it never was any of the above.  Nothing may be taken for granted.  Samples…words and sounds made captive during even deader times…are snatched and crumpled.  Bastardized.  Stretched, distorted. Pounded into molecular decimate, and then cast off…pushing the limits of P-Orridge’s splinter test.  Their spirits waft amongst the digital all within the void of null.  Ghastly adumbrations thread the zeros and spiral the ones.  Surely such cannot be?  But it is.  Your faith lies in disavowal.  Let the splitting of heads commence.
-TRTRKMMR
Posted by AUM WAR at 1:24 PM No comments:

-sold out- repress on At A Loss Records available at www.bluecollardistro.com
Posted by AUM WAR at 8:27 PM No comments: 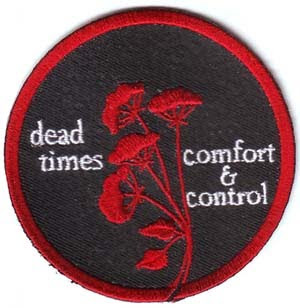 We have new 3" embroidered circle patches for Dead Times. $3 plus shipping. Paypal preferred. Contact us at aumwar (at) gmail (dot) com for order. Please indicate shipping address in e-mail.
Posted by AUM WAR at 10:42 AM No comments: 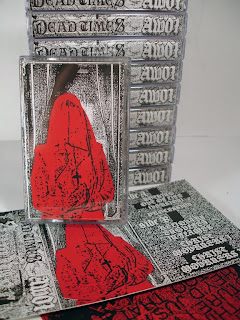